In the past, the Amazon Museum of Ethnology and the Amazon Museum of Nature, located in Tsuruoka City, Yamagata Prefecture, used to display and store ethnographic and biological material from the Amazon region. The museums closed in 2014, when conservation efforts began to preserve the exhibits for future generations. With some 8,000 everyday articles and 12,000 biological specimens and stuffed animals, the collection of cultural anthropologist Yoshihiko Yamaguchi goes far beyond the level of a private collection. It includes a wide range of materials, from tools used in the daily lives of the indigenous people of the Amazon River basin to specimens from local life in South America. The objects that were collected over more than ten years since the 1970s through direct communication, including “bartering” with the local people, are raw cultural resources.

Making their own tools with materials available in the area where they live, and surviving by using these tools combined with their wisdom: these indigenous people living in the Amazon River basin, although fewer in number now, are still living in very close harmony with nature, despite the gradual ongoing extinction of their ethnic traditions and languages.

This is not a story from the distant past or of another world, but that of a way of life that is still being lived on this planet today. These everyday tools from the Amazon have been made while taking into account their relationship with nature, and with their users. Yamaguchi’s collection is made up of the emotions of the craftsmen who have been making these tools.

For nature, for families, for ethnic groups, for future generations, and for human beings who interact with one another. None of these relationships can survive without a clear sense of compassion for others. At a time like the present when so many natural and man-made disasters are occurring, it seems that there is even more to be discovered and learned about here.

As a child growing up in Tsuruoka City in Yamagata Prefecture, surrounded by abundant nature rather than the material world of today, my greatest pleasure was collecting insects from the mountains and rivers. Beside my insect companions, books were also good friends of mine. When I was eight years old, I read a book about an adventure in the Amazon rainforest in South America that led me to decide that I would definitely go to the Amazon to collect Morpho butterflies and Hercules beetles myself. Later, when I went to study at a university in France, my fascination with the Amazon grew even more. The French anthropologist Claude Lévi-Strauss’s study of the indigenous people (Indios) living in the South American rainforest really struck a chord with me.

At the age of 28, I set foot in the Amazon. The place I had always wanted to visit was even more vast than I had ever imagined. In the midst of the deep forest, I found a wide variety of life forms interacting with one another, and the indigenous people were living in a harsh environment, helping each other as human beings do. While living under the same roof with them, I came to understand that the tools they used were “something essential yet magical” for people living in the forest. And so I went back and forth to visit the people of the deep forest, bartering and collecting their tools. I was obsessed with this at the time, and before I knew it, I had amassed a huge collection of ethnic materials.

Today, when I look at the Amazonian materials I collected half a century ago, what comes to my mind are the faces of the indigenous people with whom I interacted. The lives of these people, without electricity or running water in those days, may have been impractical compared to our present way of life in Japan. However, they were in fact rich in many ways, because the forest gave them what they needed. I realised that this was why everyone seemed so happy there.

The Amazonian forest is everything to the indigenous people, and if the forest disappears, they will also perish. The tools of the Amazonian indigenous people are proof of the harmony between nature and human life, and they speak to all of us who live in a modern society plagued by pandemics and natural disasters. It is my last mission to spread this message. The indigenous people of the Amazon have chosen to exist together with nature rather than to exploit and conquer it. I hope that their wisdom will help us to find the “humanity” and “rich resources” that we all have within us. 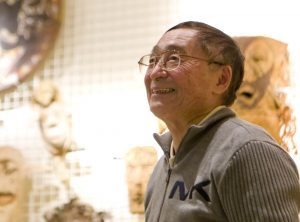 As an insect-loving boy, his first yearning was for the “insect kingdom” of the Amazon forest, with its giant beetles and shining blue morpho butterflies. Later, he became interested in the life and culture of the indigenous people living in the Amazon. While studying in France, he was fascinated by the fieldwork of Lévi-Strauss, which made his dream of visiting the Amazon even more excessively. Since then, for more than 40 years, he has been conducting surveys, research, and collecting materials on “nature, culture, and their harmony” in the Amazon.